The international break is looming ahead while we can't be more excited for gameweek 3 of the Premier League. the first two weeks had been packed with action with the fans in the stands providing this extra incentive for the players to give everything. You can buy-in into the main event for €12, fighting for €50,000 every week now at Fanteam in their traditional Weekly Monsters.  The €2 Monster is also on offer with an increased prizepool of €15,000 this week, making it a great place to start for someone just beginning their fantasy journey. Head onto Dreamsport.com to play fanteam tournaments for free if you want to check out all this fantasy business before putting your money on the line.

There are no obvious captaincy choices this week with big boys battling it out and the City game not included in the slate. Surely a week to get creative. Will you take a risk and opt for "I-am-staying" Kane or pick a safer captain in Son? Spurs haven't been too impressive and might struggle against a low block.

Will you turn your attention to high-flying West Ham and their talismanic forward Antonio? I am tempted for sure.

Are Leicester fit and sharp enough to put Norwich to sword? Who is captainable in that fixture? There are so many questions this week and so many interesting value picks in the lower end of the spectrum.

Newcastle and Southampton have the worst and third-worst defence in the league and are meeting at Saint James Park, will we see goals-galore or a bore low-scoring match against all odds?  Will Wolves finally score, are Brentford really that solid defensively, can Leeds break down Burnley again? The weekend will be thrilling, that's for sure.

The budget is set at 105 mln. with 9 games (no MCI-ars game to get us rid of Pep's roulette just this time) making up the slate. Here are the stacks that I believe offer value this week.

Antonio, in my opinion, has one of the best upsides in this slate. West Ham are projected to score 1.8 goals, only Spurs are projected to score more.  I probably don’t need to tell you he leads the league with 2.52 xG and 11 shots (6 on target). He has scored and assisted 3 times each already and looks in the best form of his life.

I would advise adding Soucek and Fornals or even Cresswell for this 3-man stack instead of Benhrama. The Czech will be less owned than Benhrama while he has 7 shots (that’s better than Benrahma's 5) and 6 touches in the opponents' box. Fornals leads the team in chances created with 7 and expected assists with 1.0 xA. What’s also important is that they both played 2 full matches, unlike Benrahma. Creswell is on set-pieces with a more than solid chance to keep a clean sheet.

West Ham have a 42% chance to keep a clean sheet

I like Newcastle's vertical stack here with Saints attack far from convincing. I still doubt the Magpies keep a clean sheet (27% chance according to bookies) given the fact that they have conceded 4.60 xG (20th) in 2 games. Ritchie plays in an advanced wing-back position and takes set-pieces. He looked electric from the get-go whipping in 21 crosses (2nd) and creating 9 chances (2nd, only Alexander-Arnold has more). Even if Newcastle fail to get a clean sheet, he might walk away with an attacking return.

Wilson leads the team with 7 shots (2 on target) and 1.17 xG. Saint-Maximin only has 1 shot to his name but 4 chances created. He plays as an OOP forward and hasn't been subbed off in his first two games.

Newcastle are projected to score 1.4 goals

Brentford have allowed only 7 shots this week while restricting their opponents in the last 2 games to 1.44 expected goals conceded. Only Chelsea and both Manchester clubs had allowed less. Pinnock is a goal threat Raya is one of the most affordable goalkeepers this week, Toney plays full matches while Mbeumo with his oop role and set-pieces is a great shout as well.

It looks like the Villains attack is yet to gel. They did look better with Douglas Luiz back for their second league match, but still fancy the Hornets to get on the scoresheet – who you pick between Mbeumo (5 shots, 4 chances created, 8 box touches, on set-pieces, OOP but doesn't play 90-minutes) or Toney (5 shots, 10 box touches, on penalties, plays 90-minutes) is up to you.

Another budget stack this week that might fly under the radar is Wolves. Most will look at their 0 goals scored and two defeats, but we are smarter than that, right? Wolves produce 42 shots (2nd), 9 shots on target and 2.89xG.

Traore plays full matches, will be a threat on the counter, and he leads the team with 10 shots.

Jimenez is not far behind with 8 shots and 7 chances created. United have one of the sturdiest defences in the first 2 gameweeks – 19 shots conceded (4th) and 1.29xGC (3rd) – but I am backing Wolves to finally score in front of their fans. 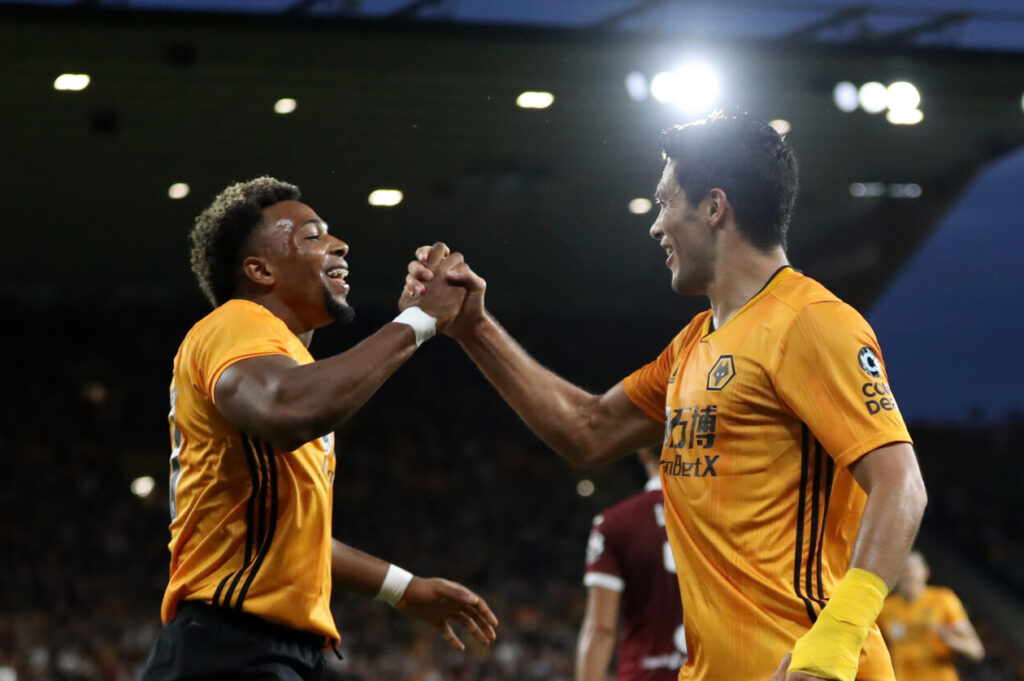 I like the Everton defensive stack because it comes with an in-form striker for a great price and a set-piece taker. The same can be said for Brighton if only we were sure Maupay was to start.

Calvert-Lewin has 9 shots (6 on target), 2.14 xG and hopefully will play 90-minutes this time as he builds up his fitness. Everton haven’t convinced me defensively yet, but they weren’t terrible either. They are given a 35% chance to keep a clean sheet and the host's main man might not be fit to start.

Mina is a threat from set-pieces which combos well with Digne, who takes corners and indirect free-kicks.


Enjoy playing the Weekly Monster with great guarantees on Fanteam  this week and may your picks lead you to glory!