Hopefully, by now you have read the predictions article posted earlier in the week and realised that predictions are a pretty difficult gig. Aren't they, FPL Pup? Well, I decided it was time to put my neck on the line with some predictions for what is left of the football and FPL season.

Of course, I'm not going to do it alone – I've roped in some of the DraftGym crew and some of the wider FPL community to give us their predictions too. On top of that, we will have a competition for readers to complete their predictions, and the winners at the end of the season will grab themselves some merchandise!

We are going to make some predictions about the remainder of the football season. Who will finish in those crucial positions in the Premier League table? Who will take home the Champions League and Europa League trophies? But we will also predict our top-scoring players in each position in FPL for the remaining 9 gameweeks of the season. So what are we waiting for? Let's dive in and make a start!

Q1 - Which teams will join Manchester City in the top 4?

As dull as it feels, I can't see the top 4 changing. Man Utd probably have the toughest fixtures remaining of the teams in the race with Spurs, Leicester and Liverpool to play in amongst their Europa League campaign, but it feels as if they have enough of a buffer and enough quality to maintain their position as long as they can keep Bruno Fernandes fit and available. Leicester might feel like the biggest risk but their fixture run between GW33 and GW35 is their chance to bag nine points and secure their spot, and I expect them to get the job done with James Maddison returning from injury to give their midfield a little more creativity in behind Vardy and Iheanacho.

Chelsea have looked impenetrable under Thomas Tuchel (yes, that part was also written before that 2:5 home defeat to WBA, insert your laughing emotes here) and that defensive steel should see them pick up enough points to perhaps overtake Leicester and take 3rd spot.

The only team that I fear could break up the party would be Liverpool as their fixture run from GW31, in particular, should lead to so many victories. But we've seen Liverpool struggle massively in games that were perceived to be easy at home and the Champions League campaign could very quickly become the priority if the result against Arsenal in GW30 doesn't go the way they hope. I think they'll finish strongly - but it won't be strong enough.

Q2 - Who will join WBA and Sheff Utd in being relegated?

Fulham vs Newcastle in GW38 might end up being the only genuinely interesting game on the final day of the season with the way that the league is shaping up, but how mouthwatering would it be if Premier League survival comes down to a shootout like that? We haven't seen a situation like that since 2007 when Wigan run at Bramall Lane to relegate Neil Warnock's Sheffield United, and it will be an incredible way to end a fantastic recovery from Fulham and Scott Parker.

I genuinely expect Fulham to steal survival from the jaws of relegation and their recent resurgence would make it a well-deserved escape. Steve Bruce can return to his novel-writing past (google it) and Newcastle can return to the Championship and enjoy a season of success, before coming back up to start the battle all over again. Yo-Yo club beckoning....? 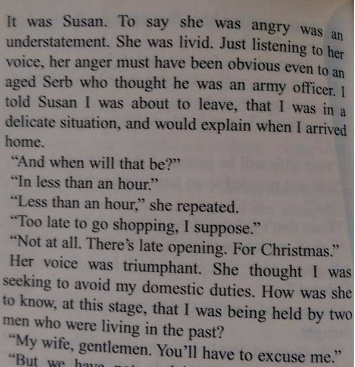 (An extract from one of Steve Bruce's novels.....gripping stuff.)

I'm taking a punt here that I think Schmeichel might be able to strike a good balance between clean sheet points and save points. Leicester have the toughest of tough fixtures in GW30 against Man City but their fixtures after that don't leave me expecting them to concede many goals. The run from GW33 to GW36 (WBA H, Palace H, Southampton A, Newcastle H) is about as good as it gets, and I wouldn't be surprised to see clean sheets and save points in their fixtures in GW37 and GW38 against Chelsea and Tottenham – though a lot could depend on the league situation at that point. There's a lot of good options in this area, but I think Schmeichel could be a great option for those looking at a wildcard either in 31, or in the potential blank GW in 33.

This is a monumental punt...

I would ideally have liked to back a Chelsea wing-back here but I don't think any of them are nailed enough and the points are likely to be shared between the 4. My main consideration here was to go with Trent or Robertson, but they are potentially 1 defeat away from all the eggs going into the Champions League basket. Semedo is a mad guess, but it's my article, and I can do what I like.

Whenever Wolves are on for a clean sheet after 60 minutes, he's usually right up there in the bonus points reckoning. The problem is that it's normally him that does something stupid to cost them the clean sheet in the last 10 minutes. He looks like he could be a threat in terms of creating assists (if anyone for Wolves can remember how to shoot), and I'm just going to gamble that the run of fixtures they have will allow him to get a couple of hauls. Looks like I'll have to buy him on my wildcard......eek.

If Son is back from injury, I see some fixtures where he could do some serious damage. The double gameweek in 32 really appeals to me with Son, and with Newcastle, Sheff Utd and Leeds to play too and no Europa League to be concernd about, there doesn't seem anything to worry about in terms of rest and rotation. Son can be hugely explosive and if he can get off to a good start in GW30, I think he could finish the season on a hot streak. Salah will run him very close if he starts 7 of the last 9 games as the fixture run is scary, and if United continue to earn penalties every 23 seconds, then I think Bruno will be right in that mix too.

Aubameyang is the interesting one with Sheff Utd, Fulham, Newcastle and WBA to play between GW31 and 35. If Arsenal are still in with a squeak of finishing in the top 4, or they go out of the Europa League, he could become the man to own - but it'd take a brave man to take the gamble.

Read more: Ridiculous Takes from the FPL Season so Far

Time for one more party...

A really close call between Kane and Vardy for me as Maddison nears fitness to hopefully enable Vardy again as a threat, but as I know most of my prediction rivals are going to swing with Kane, why not swing against the tide? I think there's every chance I will own both on my GW31 wildcard, but I think the run of fixtures for Vardy between GW33-36 could bring multiple double-returns and he's always an absolute bonus magnet. I fancy him to net enough goals to just hold off Kane if they both stay fit, but I don't think there will be much between the two. It might be a case of whether Iheanacho takes away enough of Vardy's returns to allow Kane to shade it on goal involvement. But I'm ready for one last dance at the Vardy party.

Q7 - Who will win the Champions League?

I just fancy the Bayern Munich juggernaut to roll on. Unless Lewandowski's injury worries persist after his recent absence for Poland, I think the combination of fire-power from him, Gnabry, Coman, Sane, Muller and the rest combined with the big match experience and the confidence of their recent glories will see them shade out a City side that are growing closer and are probably a fresh-faced (Norwegian) striker away from being the Champions. Liverpool might be the fly in the ointment. A poor result against Arsenal might see them invest their time entirely into the Champions League campaign and the draw has been kind to them - they could be the ones laughing come the end of the season in Istanbul.

Q8 - Who will win the Europa League?

I like the way that the draw has fallen for Arsenal. They are perfectly capable of turning the gun on their ankles and shooting themselves in the foot, but you can't ask for a better route to a Europa League final than Slavia Prague (sorry Spurs fans) and then a likely semi-final with Villarreal. Man Utd and Ajax are likely to go toe to toe in the semi-finals and I'm hopeful Ajax could get the job done there. But it's just a sneaky suspicion in the back of my mind that Arteta's Arsenal might be the ones holding the heaviest UEFA trophy at the end of it all in Gdansk.

Keep your eyes open for that readers competition to go live on Twitter in midweek!