Having discussed which FPL and FanTeam   premium fantasy assets to consider for the opening gameweeks, I will now delve into the mid-range fantasy assets. We now move from luxury goods to store-brand, to allow us accommodate our premium assets that take our fancy. For many, this will be the most volatile part of your squad tinkering. In this price range it is important to focus on fixtures. Because this is the price range where we will be focussing the majority of our transfers. Picking players for a run of 5-7 gameweeks. While the big hitters should remain nailed in our squads for the majority of the season. So which mid-price assets should you consider for the opening gameweeks?

Chelsea begin the season with four decent fixtures and two tough match-ups in between. I suspect most teams will have at least one Chelsea asset, but there is a plethora to choose from.

One man going under the radar is Mason Mount who is select by only 9.8% of teams. In a team which had plenty of rotation in Lampard’s first season, Mount had the 2nd highest amount of minutes for any outfielder (2,865) with only Azpilcueta beating him. However, the potential signing of Havertz could impact his game time next season, so keep an eye out.

He managed 7 goals and 6 assists last year, starting the season in flying form before the attacking returns dissipated. Yet he closed off the season with a reminder of his capabilities, scoring a wonder free-kick and assisting Giroud against Wolves.

With the signings of Werner and Ziyech as well as Pulisic growing in strength week on week, I expect Chelsea to rack up very high attacking output. Although these mentioned players will be amongst the goals more, I wouldn’t be surprised to tick along nicely each week picking up assists. He provides particularly good value in FanTeam.

New signing Ziyech comes in at a slight saving compared to Pulisic having torn up the Eredivisie for a number of years now. He has been providing both attacking and creative output as the numbers below show (note, the 2019/20 season was curtailed due to COVID-19):

Ziyech shows many similarities to Salah. He too has a selfish style, shooting at will as much as possible.

However, before getting overly excited, the majority of these shots are from distance. As he manages to hit the target every 52mins, equivalent to nearly 1 in every 3 shots.

The step-up from the Eredivisie to the Premier League is significant. Does anyone remember Vincent Janssen? In 2015/16 a remarkable 27 goals from 34 appearances at AZ Alkmaar earned him a move to Spurs, where he then managed 2 goals from 31 appearances.

So those considering Ziyech, I would recommend spending the extra £0.5m for Pulisic if you have it. Although the £1m saving in FanTeam is an enticing prospect.

Pulisic had a great debut season at Chelsea but left us wanting more as his injuries limited him to 25 Premier League appearances. Nevertheless, he still managed an impressive 17 attacking returns (9 goals, 8 assists). Pulisic’s main threat comes in the form of goals, with 4 assists being fantasy assists. Him getting tripped up on a darting run into the box followed by Willian converting the penalty became a familiar sight post restart.

Pulisic had 63 shots for the season, with 53 impressively of these came inside the box

This breaks down into a healthy shot every 27mins and a shot in the box every 32mins. If he returns from injury in time for the season start, he looks to be in a good position to claim numerous attacking returns in the opening five gameweeks.

Yes, that is a lot of discussion on Chelsea. Having said that, it is merited. Attacking wise Chelsea matched Liverpool statistically last year yet they managed 16 goals less. With this new firepower and hopefully a fit Pulisic, I expect numerous goals in these opening gameweeks. My order of preference follows the price order; Pulisic, Ziyech and Mount. However, our team structures will dictate who we can afford, and I believe they are all good options. 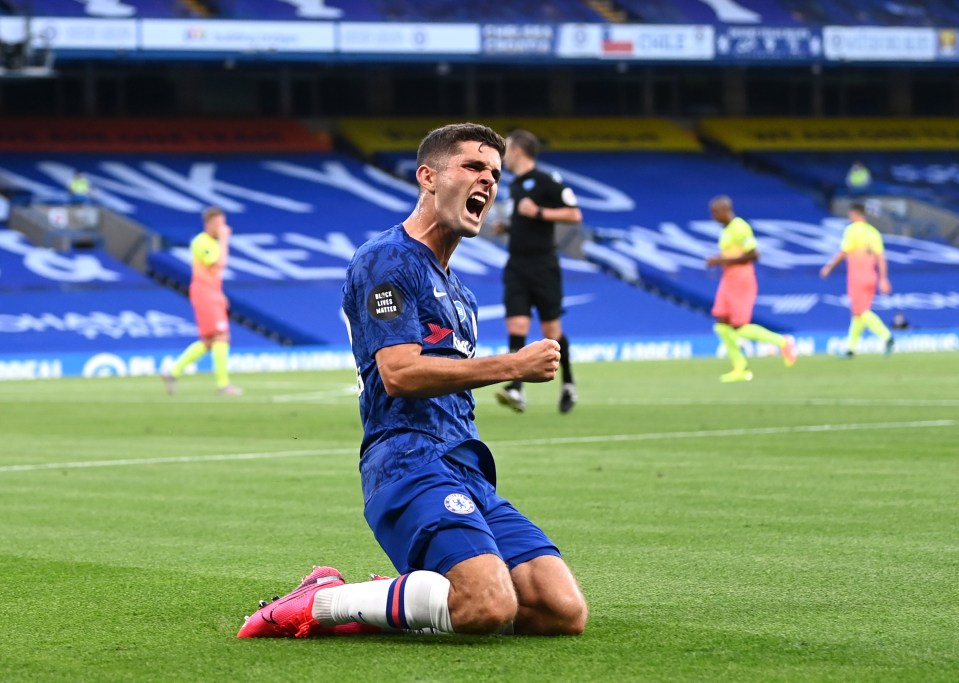 Aside from the blank GW1, Manchester Utd have tremendous fixtures until GW12. Many will be going without their assets for GW1 as they don’t want so much money tied up in a player who is not playing. But Greenwood breaks that mould. He is costly, but his price still allows you to build a strong GW1 side around him allowing you to bench him this one occasion.

Post restart is when Greenwood came into his own. Having bulked up during the lockdown, he started playing regularly on the right of a 4-2-3-1 formation and has thus been reclassified as a midfielder. In 9 matches played, he started 8 times, cementing his place scoring 5 times and netting 1 assist. That was better than Rashford’s 3 goals and 3 assists on the opposite flank.

Looking closer at the numbers those investing in Greenwood have to ask themselves the question “Is Greenwood’s returns sustainable?”

Over this period, he had an xG of 0.99 meaning he scored 5 times more than he was expected to!

His finishing ability is top-notch and bodes great signs for him as a future talent. This is evidenced in his xG Shots on Target, where from a xG of 0.99 his quality of strikes upped this value to 2.22. Conversely, Rashford had an xG of 4.25, indicating that his 3 goals was an underachievement.

Greenwood is a top talent and a good option. Just keep these numbers in mind before investing and ensure you are happy with them. Also, if Manchester Utd do sign Sancho, which is looking less and less likely as time passes, then Greenwood will again be rotated heavily. As Ole reiterated many times that he is still a developing talent.

Leicester start the season with four excellent fixtures in their opening five gameweeks, with three of these games being at home. For those who can’t splash the cash on Vardy, they can drop into their midfield for more budget-friendly options.

There is little between the two performance-wise. Given this, in FanTeam I would favour Barnes given his lower price tag. But picking between the two may come down to your taste in FPL. Per the below Barnes is the bigger goal threat. Although both players finished on 6 goals, we can see Barnes was expected to score around 8 –  an underperformance he may overcome following his Premier League experience this year. While Maddison has a more well-rounded game, offering more assists than Barnes as well as the odd goal.

Keep an eye on pre-season to see if Barnes looks a nailed starter. If he is, his xGI indicates he is the better pick. However, Maddison’s assurance of starts may make him the safer option.

A tough opening two fixtures on paper for Wolves followed by five great games which include two promoted sides and three which finished in the bottom half last year. I am beating the same drum a while here, but Wolves looked brilliant defensively following Boly’s return in GW25, keeping 9 of their season’s 12 clean sheets after his return.

Focussing on Doherty he had 4 goals and 8 assists for the season as well as 15 bonus points. Out of all the defenders, he had the 2nd most attempts on goal (35) with Trent Alexander-Arnold topping this category.

33 of Doherty’s 35 shots were inside the box, which was the best out of all defenders last season with TAA only managing 15

Also, 15 of Doherty’s shots hit the target, which put him joint 1st alongside TAA. Picking Doherty as a set and forget option will have its merits.

If the earth was flat (*sparks controversy*), well then Everton fell off the side of it post-project restart.

They should not be completely neglected though as they have 5 nice fixtures in their opening 7 fixtures against newly promoted or bottom half teams.

I won’t dive into these player’s numbers post restart as they were both very poor in their own ways. Richarlison did manage 3 goals in 9 games though, so he is the more reliable of the two. But at a £1m saving in FPL is enticing.

DCL was electric when Ancelotti became manager. He was topping every striker statistical metric at that time. As a result, he finished the season with 13 goals and 1 assist. Richarlison could only match these 13 goals but managed 5 assists in total from an extra 400mins. Although he did play a more withdrawn role before Ancelotti arrived.

If DCL does well in pre-season, I think he is worth the punt for that extra saving. But keep a close eye on their pre-season, a few dodgy results and I would avoid this team completely. They have already started preparations with a draw against League One side Blackpool…so tread carefully.

Chelsea are providing excellent value in this price bracket. Who to pick is the challenge. The imminent signing of Kai Havertz will add further confusion on who to pick.

My advice to fantasy managers is to limit the number of new players on your team to 1 or 2 at the start of the season. This includes players from promoted teams. So if you want to take a punt on Ziyech, and his attacking numbers fully support this, but the settled Pulisic is my preference.

Similarly, if Havertz signs, his great Bundesliga numbers may entice you: 12 goals and 6 assists in 30 appearances. But being 21 years of age, he may take time to settle. It is also worth noting  that he is yet to score or assist in 8 appearances (514mins) in the Champions League.

Limit yourself to 1 or 2 punts maximum. Risk to do more and your team may be full of expensive assets who are only making substitute appearances.

For those interested in the cheaper Manchester Utd and Leicester assets, I would strongly encourage trying to fit in Bruno, Martial or Vardy before moving down the ladder. And yes, I omitted Rashford there for a reason. If you cannot fit them in, then the above-mentioned players are good alternatives, but they may be not as reliable.