I remember failing miserably in my first tournament on FanTeam a few years ago. I chose as many big-name players as I could, hit the salary cap midway through, and just plucked the holes in my lineup with cheap players I barely knew existed. That is not to mention the fact that I had a squad full of players whose teams were playing each other – a mistake you simply can not make if you are serious about playing DFS. But I was eager to learn and, albeit doing it the hard way, I did understand how to build better teams that could earn some cash.

In this article, I want to share some tips on building a better line-up based on the tournament type you are playing. There are 3 basic types of tournaments in the DFS world: large-field tournaments with guaranteed prize pool (GPP), double-ups (sometimes referred to as 50\50 contests)  and head-to-head games. Let us take a closer look at each type.

There are also 1-match games, which are a totally different beast and will be reviewed separately in a different article.

Guaranteed Prize Pools (GPP) tournaments are typically the ones with the largest prizes – that’s where the big money can be made.

A DFS site guarantees that the prize pool will not change no matter the number of registered teams. For example, 1,000 teams must be registered in an 11 euro tournament to accumulate a 10,000 Euro prize pool (1 euro collected as rake by the site) link to the DFS terms article.  In a guaranteed (GPP) tournament all of the prize pool money (10,000 Euros in our case) will still be paid out to the best players even if 890 users register. Or 500. Or even 10. What happens if more than 1,000 users register for that particular tournament? The more, the merrier - the prize pool grows and that means more money for the lucky winners.

While your goal is obviously finishing as high as possible, it is easier said than done as large prize-pools attract large crowds of people as well. And finishing at the very top means beating hundreds, or even thousands, of other users. Let’s look at what can help you be up to the challenge.

Make sure you study the payout structure for the selected tournament. Typically, top 15% of players land in the money (link to the DFS terms article). But some sites may offer prizes to only top 10% of users or, on the contrary, to 20, or even 25%.

The payout structure may also differ with some tournaments. Some favor top finishers and award them handsomely with substantial chunks of the prize pool, while the others’ payouts are more evenly spread between all lucky enough to finish in the money.

Payouts for a 25k EPL tournament

Multi-entry is usually allowed in such tournaments and most players take advantage of that entering many lineups to get to that coveted number 1 spot. And so should you. Depending on your bankroll (link to the BRM article) you should decide how many teams you want to register. There are people lucky enough to win these with a single entry, but in general, you should try to enter at least a couple of lineups to maximize your chances for a big pay-day. In case you are not looking to spend much or still getting a hang of things, we recommend entering more lineups in a cheaper tournament rather than just one or two in a more expensive one. Yes, you get less in case of a win, but this approach allows you to learn the ropes of building lineups faster without putting a lot of money at risk.

When you register many lineups, it’s important to correlate players. Look for a positive mutual relationship between players and avoid the negative ones. Stacking defenders from one team is an example of a possible positive correlation as all your defenders get points in case of a clean sheet. On the contrary, picking players from teams playing each other is an example of a bad correlation. Due to FanTeam scoring system, they negate each other’s impact points and hurt your team’s total amount of points gained. We have touched on the matter substantially here (link to Scoring explained).

Unlike other sports (i.e. American football, hockey), where a pass received or a goal scored automatically yields points for other teammates, football is different. Points for a goal and an assist are awarded only to the scorer or the provider respectively. But there are some offensive “combos” found in football as well. If you are predicting a thrashing, it might bode well for your team to stack a few offensive players from a given team, hoping they score lots of goals and assist each other in the process. Liverpool and Manchester City players are good examples of an effective explosive “combo”. Mane+Firmino+Salah or  Aguero+Sterling+Sane can spearhead your fantasy team’s attack and provide fabulous point returns.

Arsenal's attacking stack and Liverpool's defensive stack in one team

It goes without saying that you must also avoid having attackers and a goalie from teams playing each other.

The more teams register for the tournament the more important it becomes to play contrarian – that means picking players that others might ignore  Your team has to differ, even if its only one player that makes your lineup stand out of the crowd. If he has a monster-of-a-game, and you are one of the few contestants to have him in your fantasy team, then your team is almost guaranteed to leap up the standings. Provided your other picks are decent as well. You don’t necessarily have to have a roster full of low-owned players. That will rarely lead to victory, as most low-owned players are low-owned for a reason - they don’t deliver or don’t do it often enough. A good balance of high-floor (link to terms article), solid, proven players, yet capable of an explosive game, and a few low-owned boom-or-bust type of players with huge potential upside is the way to go in large-field GPP tournaments.

So, if low-owned players are key to success, how do you find out who your opponents pick and who they don’t? Well, to be honest,  there is no way of knowing exact ownership percentages for a given player prior to the kick-off, but you should make your best-educated guess nonetheless. Do your research, read fantasy related content (and we will share our predictions on ownership percentages and analyze them afterwards in our articles and videos here at DraftGym), feel who the “crowd” is most likely to bank on this given week and act accordingly. As the rule of thumb, the more players registered in a tournament, the more contrarian you should make your own team, the more differential some of your picks must be.

Double-Up tournaments are a good place to start for a new DFS player. You don’t necessarily need to nail all your picks, there is room for mistake,  your goal is to beat just 50% of users. Finish in the top-half –  double your money, in the bottom half –  lose your money.  Mind you, all users in from the top half get paid the same amount. It doesn’t really matter if you finish first or smack in the middle of the winning pack. 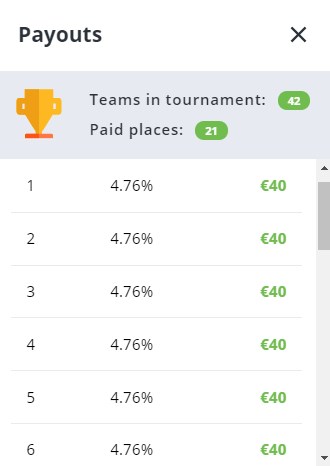 Don’t use GPP teams for double-ups

The strategy for creating your lineup for these types of tournaments is different from the one in GPP. Unlike most large field tournaments where it pays to play contrarian, here it’s all about chalky players – players that many contestants will select for their teams. Your general strategy is to minimize the risk, to play it safe. Because if you don’t have a player that 70% of users had selected and he has a good night – you are screwed, you are dropping out of that money winning 50%.

Very often expensive players fall into the “safe picks” category. They are usually match-proof, consistent and have a “high-floor” - a good chance of yielding at least some point returns. You must build your team around these players in double-up tournaments.

Forget about choosing a differential captain. Your best bet would typically be 'captain obvious'. No need to get tricky here. There is a good chance most of your opponents will choose the same guy. Even if he fails to provide substantial returns, you’ll be in the same boat with most other contestants, and then it will fall to other players from your team to make a difference. An ill-chosen captain in a GPP tournament means complete failure. In a 50/50 contest – just an unfortunate setback. Especially, if you had gone with captain-obvious who most other users had also picked.

Try not to stack many players from the same team. The name of the game is 'lowering your risk', not 'putting all your eggs in one basket hoping it works out'. Choose defenders from teams playing at home. Preferably, against weak and low-scoring opposition. Choose no more than one from a team (or two, if clean sheet odds are exceptionally good).  On most DFS sites you won’t be able to squeeze in only premium defenders from top-teams, so looking for budget picks from mid-table teams playing at home against similar opposition might yield good value. Check clean sheet and goals total odds to help you single out best budget-friendly picks.

The same concept applies to attacking players. Your best bet would be to pick no more than 1-2 players from a team. Point-leaders, proven goalscorers, penalty, and free-kick takers. These are the guys to look out for. In good teams, there are at least a few players capable of having a big night. They are a must in your double-up team, but pricey. Mid and lower-table teams usually have just 1 player who is involved in a plethora of attacking action. Grab budget-friendly options who are involved in more than 40-50% of their team’s goals (Jimenez, Arnautovic, etc.).

Slow and steady wins the race – that is the way to go in double-up DFS tournaments. Avert risk, play it safe; your goal is to pick solid, proven players to beat only half of contestants.

In general, your approach should be identical to the aforementioned double-up tournaments. The only other suggestion worth adding is the opponent selection. As you plunge into the world of DFS you will soon stumble into very-skilled players – “sharks” – that frequent H2H games looking for novice players to prey upon. There is nothing wrong in playing them a few times to familiarise yourself with the format, but, in the long run, you will most likely lose money playing against them. Learn who the sharks are and avoid playing too many games against them.

We hope that now you will be able to understand the formats offered in Daily Fantasy better and choose what best suits your playing needs. May you lineups be good, good luck!

You can participate in daily fantasy contests here on FanTeam.